The Spa Resort Casino in downtown Palm Springs, celebrated its one year anniversary Wednesday with a bash for dignitaries and media. The anniversary was celebrated as the opening of the “New Casino” since everyone agreed, it still looks new after a full year of operation.

Tribal Chairman Richard Milanovich thanked his staff of employees for the Agua Caliente Tribe which numbers over 2400 employees. Over 800 are associated with the Spa Resort Casino and over 250 are next door at the hotel.

Chairman Milanovich was applauded by many members of the community who were present and shared in the tribe’s success noting that the tribe had contributed ten million dollars to community organizations in the course of the past nine years. Milanovich noted that the donations come out of gratitude from a tribe who still remembers poverty and hard times. He added, “We are glad to contribute to worthy causes knowing how difficult it has been for us and understanding that there are many who are in need of a helping hand today. This includes many city functions such as police and fire departments who we have shared our blessings with over the past years.” 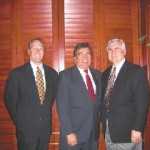