Palm Springs- Elks Lodge No. 1905 held their awards dinner for the annual Elks Drug Awareness Essay Contest this Saturday, January 15, 2005. Fifth through sixth grade children throughout the Palm Springs Unified School District participated in the contest and ten winners were awarded at the dinner. Four of these winners were given an additional award for winning at the Elks district level and will be advancing into the state competition.

The 183 local students whom participated in the event wrote their essays on the topic “Why I Won’t Use Drugs”. All the winners received a Certificate of Achievement and a small scholarship. The four students winning at the district level received an additional scholarship and have the opportunity to win more scholarships at the state and national levels.

This national youth program is sponsored by the Benevolent and Protective Order of Elks of the U.S.A. It is endorsed by hundreds of school systems and community programs around the country. The Elks fund the program primarily through the Elks National Foundation and the support of its subordinate lodges and state associations. 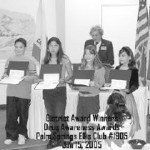