Sal Pina has earned more honors in his career than most of us see in a lifetime. He was even recognized on national television on Americas Most Wanted after solving a murder case of a young girl abducted and murdered in Indio after her car broke down traveling through the Coachella Valley on I10.

Everyone in attendance wanted to express their gratitude and fellow officers kept bringing out the cruises, plaques and certificates. Val Jimenez with the Department of Justice in Sacramento was the Master of Ceremonies.

The Mariachi group “Sol del Desierto” did a fabulous job of entertaining. The youngsters played and sang with heart and gusto. The audience marveled at their mature and professional presentation. Later on in the evening, the rhythms changed as a bit of salsa filled the aire. 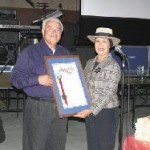