Bank of America has now established the first branch in Coachella and has its’ sights set on other branches in the city. This week marked a very busy time for the new branch and it is indicative of the welcoming reception by the community. 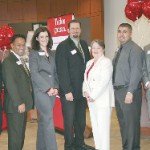